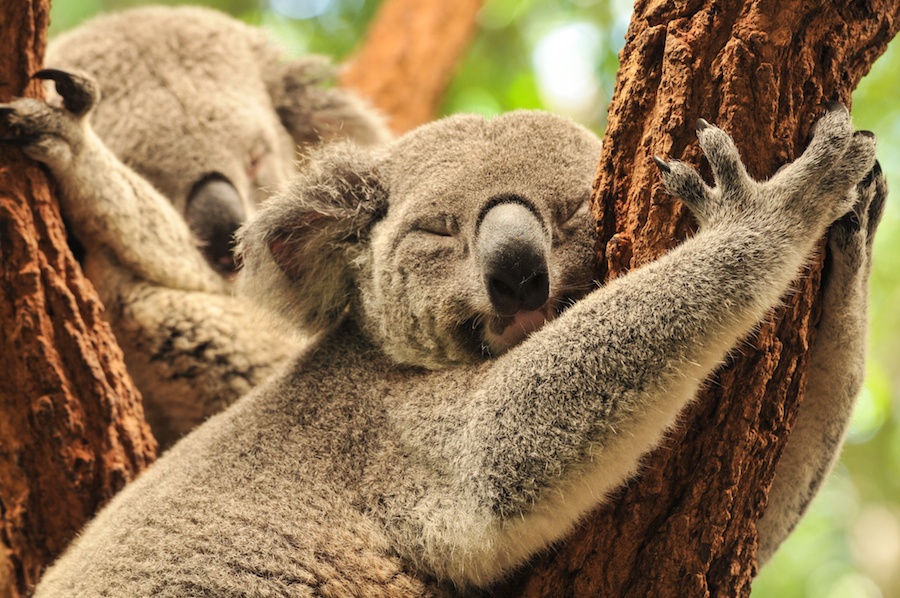 The animal kingdom is extremely varied, and the way in which each type of creature sleeps is just as diverse. These animal sleep habits are some of the most interesting.

Many species of whale put humans and other animals to shame when it comes to their ability to multi-task. They sleep with only half their brain at one time so they’re still able to take care of things like staying at the water surface so they can breathe.

If you’ve ever been to a zoo and seen koalas sleeping in a tree, it’s not surprising. They sleep over 14 hours a day but still pale in comparison to the brown bat, which sacks out for 20 hours a day. Giraffes usually need only a couple of hours of shuteye a night.

New parents know that their babies sleep a lot, but a baby dolphin doesn’t. They don’t sleep at all during their first few months of life, and their moms often stay awake also. Imagine how exhausted human parents would be if their babies did the same!

Bats sleep while hanging upside down, flamingos can sleep on one leg, and guinea baboons sleep on their heels on top of a tree. This is thought to help keep them alert to any predators.

Can Otters Get Any Cuter?

Sea otters often sleep together, holding hands to form groups called rafts. This keeps them from drifting away from each other and may include just a few otters or a group of hundreds.

Birds Can Sleep in Mid-Flight

It’s thought that birds can sleep while aloft. The alpine swift has been studied and found to stay in flight for over six months straight. Part of the time is spent gliding, so this is when they may catch some shut-eye.

Most experts think that animals dream. Mammals, for example, experience rapid-eye movement (REM) sleep, the same stage during which humans dream. One study also found that when lab rats are shown food and then go to sleep, cells in their brains seem to map out how to get to the food.

Animal sleep habits are pretty unusual, but humans need a high-quality mattress to help them get the best possible night’s sleep. Visit one of Land of Sleep’s two locations to find one that’s right for you.

Can I Train my Body to Function on Less Sleep?

I Can’t Sleep. Should I Stay in Bed or Get Up?

What Makes Stearns and Foster a Luxury Mattress?