How Certain Foods Can Affect Falling Asleep and Dreaming 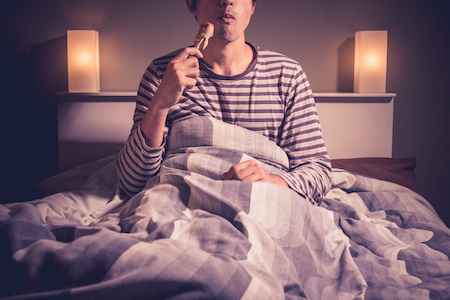 How much you sleep determines a lot about your quality of life. Beginning the day after little or no sleep or a night of tossing and turning makes you sluggish throughout the day. Instead of applying yourself fully to your job or other responsibilities, you tend only to look forward to lying down again and attempting to recapture a semblance of rest. Productivity drops considerably with lost sleep.

Related Blog: Why You Shouldn't Use Electronics Before Going to Sleep

There are many reasons why people don’t sleep well. Worries, continual noise and unusual nearby activity may be the problem. Eating the wrong foods just before retiring can also cause a loss of sleep.

What Foods to Avoid Before Bed
According to the Sleep Foundation, eating and sleeping, activities vital to life, are connected in many ways. Studies show that eating heavy foods prior to sleeping causes restlessness. The reverse is also true. People who are sleep-deprived tend to eat more rich, fatty and fried foods. So, according to the Foundation, it would make sense to eat lightly before going to bed and save those protein rich foods for earlier in the day. Eliminate caffeine and alcohol prior to retiring also.

Foods That Affect Dreaming
Livestrong.com describes the five stages of sleep and dreaming. First is a stage of just drifting off, experiencing dream-like visions with no apparent connection. The second stage is a period when your brain slows down and eye movements cease. In the third stage, the brain slows to its lowest level of activity. In the fourth and fifth phases, dreams occur, accompanied by rapid eye movement (REM) similar to the action of watching a movie. This usually lasts about two hours.

Livestrong further suggests that dairy products before bed are likely to induce vivid dreaming. Cheeses are considered to be strong dream inducers and the stronger the better, according to their report. Stilton was believed to induce the most powerful and memorable dreams. Other foods and additives that influence dream occurrence are ice cream, pickles, fish, popcorn and pickles.

After a particular heavy or spicy late-night snack, individuals report falling asleep and experiencing very active dreams, including nightmares. This is believed to be a result of increasing metabolism and the resulting brain activity.

Contact us to find out how you can find your perfect mattress today and sleep on it tonight with our free same day delivery!

5 Effects of Oversleeping and How the Right Mattress Can Help