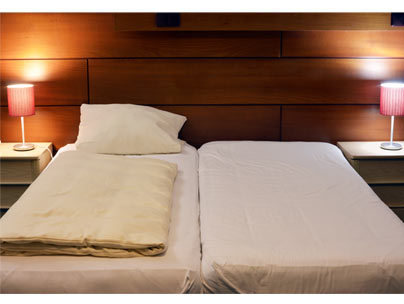 After a long day, there's nothing better than climbing into your bed.  But how long has it been since you washed those sheets?  If you think you've been changing your sheets often enough, you're probably wrong.  Here's how often you should be changing your bed linens and the reasons why it's so important.

Related Blog: 5 Reasons You Will Rest Better in a Clean Room

How Often Should You Change Sheets?

According to the Cleveland Clinic, you should be changing those sheets at least twice a month.  However, during warmer weather or if you suffer from allergies, linens should be washed every week.  So why so often?  The reasons are simple enough.

Dust mites are tiny, microscopic creatures that can live on your bedding, mattress, and pillows.  They like to feed on the flakes of skin you shed each day.  What's staggering about all of this is that each day humans can shed up to 1.5 grams of skin and feed 1 million dust mites.  That's a lot of microscopic creatures hanging out in your bed — and that's only one day's worth!

The Asthma and Allergy Foundation of America states that many people are allergic to dust mites.  Both the body part and the waste of the dust mite can cause sneezing, itching, and runny noses.  They've also been found to aggravate asthma symptoms like wheezing and difficulty breathing.   Because of this, the Foundation recommends washing bedding in hot water (130 degrees or hotter) once a week.   It's also a good idea to use a dryer on the hot cycle to kill the mites.

If the sound of a million dust mites scurrying around your bed doesn't gross you out, maybe the thought of laying in your own sweat will.  When it's the warmer months, you're more likely to sweat at night leaving dirt and bacteria behind.  This attracts those dust mites we talked about earlier but it also may wreak havoc on your skin.

If you suffer from eczema or other sensitive skin conditions, the dead skin flakes and sweaty nights can be a breeding ground for bacteria.  That bacteria can aggravate your skin condition and cause a flare-up.  If you deal with eczema, washing your sheets weekly will help keep bacteria under control and could ease your symptoms.  Just be sure to wash with a gentle, fragrance-free detergent!

There is good news in all of this. The Cleveland Clinic recommends not making your bed......right away.  If you wait to pull up your blankets and comforter, you're giving the sheets time to dry, reducing bacteria growing moisture.

What About Pillows and Other Bedding?

There is an exception to this rule, of course.  If you allow dogs or cats to sleep in your bed, you may want to wash them more.  Pets can carry diseases and infections that they may pass on to their human parents.  So while you may be looking for a cuddle, Fido may be giving you much more.  Not to mention, sometimes their little paws can be full of mud and dirt.  Animals should stay off the bed and sleep, but if you must have their company, you should launder pillows and bedding more frequently.

Frequently changing sheets may seem like a pain in the neck, but it's a good idea for your overall health and well-being.  Besides, crawling into bed at night on those freshly laundered sheets will put you to sleep in no time!

Is it Time for a New Box Spring or a New Mattress?

5 Reasons You Will Rest Better in a Clean Room